This Sunday, August 30th, sees the Tallaght Photographic Society head off on the last outing of the summer.  We’re off down to Hook Head in Wexford where the oldest working light house in the world stands on the craggy Wexford coastline.  There is plenty to photograph on the Hook Peninsuala as there is the nearby Slade Harbour and an old grayeyard in Churchtown just up the road.  Also close by is Loftus Hall, now open to the public after having been closed for many years.  Loftus Hall is said to be haunted by the Devil and the ghost of Anne Tottenham who died there in 1775.  Who will be the lucky photographer to snag a shot of her ghost?

Meeting in Molloy’s car park and leaving for the Hook at 9am sharp!  Don’t let bad weather put you off as the Hook Lighthouse would look dramatic against a dark sky!

The TPS are back again in the Maldron Hotel on Tuesday, September 1st at 8pm for a new season of meetings, talks, guest speaker and competitions.  On Tuesday we would love to see the photos taken by TPS members over the summer break.  These can be photos taken during the summer outings or shots from your holidays!

It’s also entry night for the September one-shot competition!  The theme is “Glamour” and was chosen by May’s winner, John Coffey, who will be picking the winning shot from the entries.  The winner of the competition will nominate the theme for October and judge those entries as well.

Hope to see you all there! 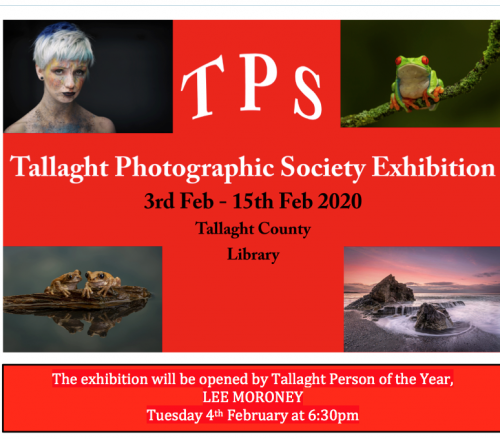